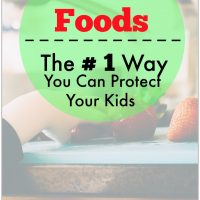 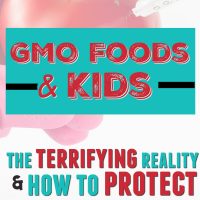 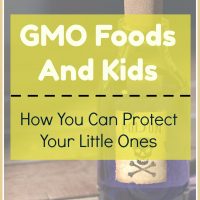 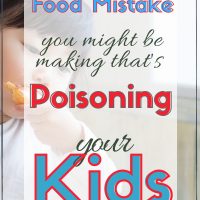 GMO Foods & Kids:  How to Protect Your Family

It’s a shame that feeding our little ones has become so incredibly difficult and scary.  I’m pretty sure that I’d not heard the term ‘GMO foods‘ back in 2012 when my twins were born.  If I had heard of it, it wasn’t on my radar and I certainly had no idea what the dangerous effects of GMO foods were. 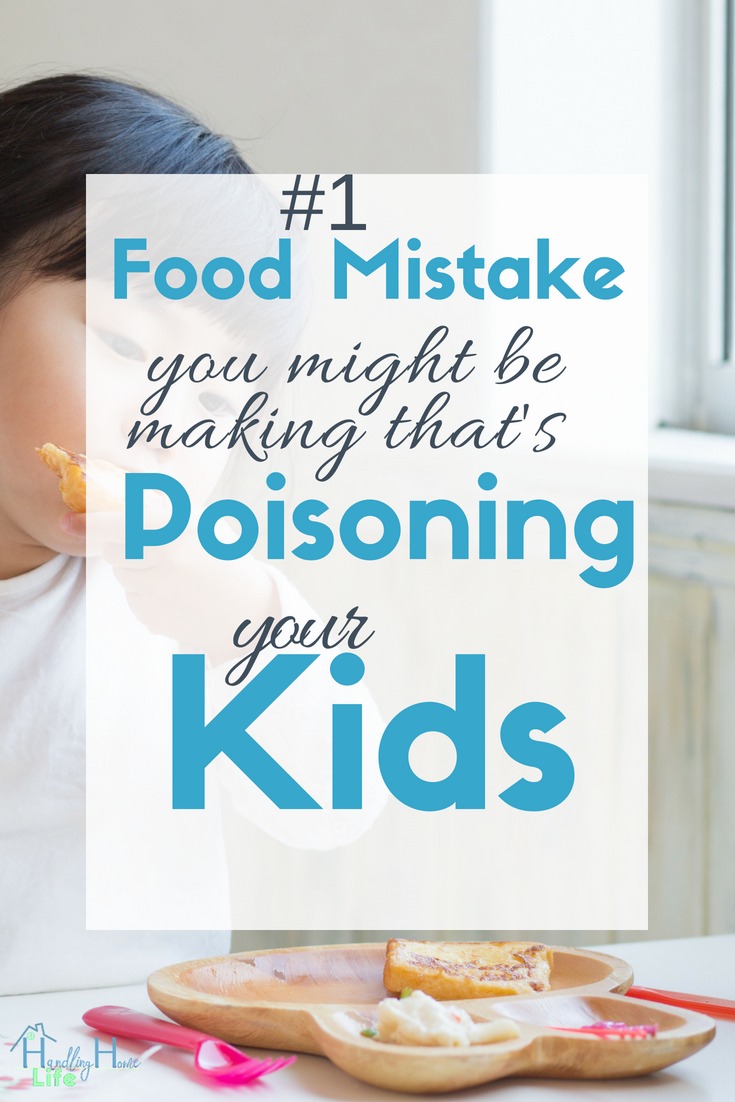 This post may contain affiliate links meaning that I may earn a small percentage (at no extra cost to you) if you make a purchase through a link that I share.  See full disclosure.

One of the babies was born with a rare disorder called KAT6A and wasn’t growing.  I was pumping breast milk for Beckem while in the nicu and also nursing the healthy twin, but it wasn’t enough.  We had to supplement with a high calorie preemie formula,  (that I later learned contained horrible ingredients including GM, processed corn).

The months that followed were an absolute nightmare.

We began working with a registered dietician/nutritionist and that was the beginning of our awareness of the dangerous and scary ingredients our foods contain.

The reality is truly terrifying and the information out there regarding GMO foods is sketchy and confusing.  I’m going break it down and tell you how you can protect your kids and your family.

If you want to skip the GMO overview, move down to ‘What the heck parents should do’. 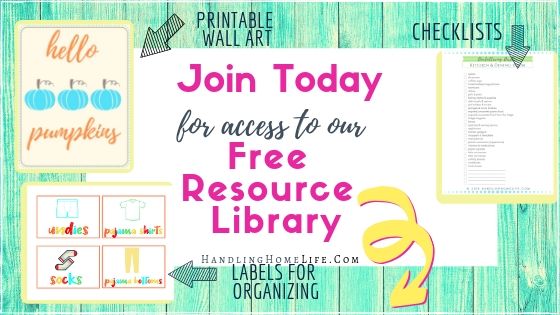 What does GMO mean?

GMO stands for “Genetically Modified Organisms“. You may also see it as GE (Genetically Engineered) .

Genetically modified plants have been altered in a way that does NOT occur in nature.

DNA is taken from another source, such as from bacteria and viruses, and it is inserted into the genetic material of the plant to give the plant different characteristics.

Why are plants Genetically Modified?

To grow larger crops, protect the crops against insects, and so the plants can tolerate the herbicides & pesticides that they are doused in.

Some plants, such as corn, are even genetically modified to produce a protein-based toxin that acts as a pesticide.

So if an insect decides to munch on the corn, the pesticide that the corn now generates from within, kills the critter.

Especially disturbing because corn is processed into so many different ingredients that is in everything.  More about GMO corn in a bit.

Plants (and animals) have been genetically manipulated for thousands of years, and much of our fruits & veggies have been altered to grow larger, taste better, to yield larger crops, or to be seedless.

However, this was achieved naturally through cross breeding and takes many years for the plant to exhibit the new characteristics.

Genetically engineering in a lab is quite different than the processes that occur naturally.

GM technology, enables scientists to take a single gene from another species of plant (or from bacteria, viruses, or animals), and insert that gene into the plant’s genome. (source)

What’s a genome? It’s the complete set of DNA of an organism (which includes all of its genes.) The genome is the keeper of all the information needed to build and maintain that organism.

What foods are GMO?

This source says that the 10 genetically modified crops available in the U.S. today are:

Corn tops the list as the most abundantly grown GM crop with soybeans in second place.

Soybeans and corn are widely used in processed foods, drinks, vitamins, medications, etc. There are so many derivatives from corn that it’s mind boggling. (see this list)

RELATED:  How to Make Easy Smoothies for Kids that are Nutritious

Why all the worry?

The FDA says they are confident that the GE foods in the U.S. are totally fine.

But, GM foods in the U.S. have little regulation. Many other countries are banning GM foods or requiring them to be labeled as such.

So even though our government ensures us it’s all good, there are numerous independent animal studies that show some seriously frightening dangers of GMO foods causing tumors, blood abnormalities, and damaged immune systems, as well as damage to multiple organ systems.

As if that isn’t disturbing enough, kids are at the greatest potential risk from GMOs because their little bodies are still growing and developing, especially the brain.

In the book, Seeds of Deception, author Jeffrey Smith explains genetic engineering in easy-to-understand terms and explains why it can cause serious health problems and why our kids are at even greater risk.  It also outlines all of the other scary issues we are facing due to GMOs.

The bottom line….there’s much we don’t know about GMOs, especially the possible long term effects.

What the heck should parents do?

What steps do we take to protect our precious children from genetically modified foods?

When shopping for foods:

The twins drink this milk now.  The brand is Pacific Foods, Organic vanilla oat milk.  I only order it from Amazon when it’s on Prime and is the same price (or cheaper) than at our local health food store.  For some reason, this milk goes in and out of prime.

I always have this Organic Protein on hand as well.  The vanilla is their favorite and I mix it with the oat milk instead of water to add some calories.

Chickpea pasta is another staple at our house.  It’s packed with protein and fiber and super quick and easy.  I slather it in grass-fed butter for added fat.

The top 10 list of GMO foods to AVOID! (source)

Our personal nightmare with GMO foods

We almost lost sweet Beckem before figuring out that his body can’t tolerate GMO corn derivatives (as well as MANY other ingredients).

The high calorie preemie formula intended to help him grow, was causing such intense pain that he looked as if he was having seizures.

He had lengthy hospitalizations and so many tests trying to determine the source of the pain and why he wouldn’t grow.  Tests for allergies, seizures, reflux (and every other GI disorder one can imagine), scans of his brain, an upper endoscopy,  blood test after blood test.

Every single test came back negative.

His tiny 5 month old body couldn’t take much more and we still had no answers.

Until we found a nutritionist who taught me about the toxic ingredients his formula contained.

After a lot of research and even more prayer, I bought the ingredients to make our own high calorie formula that was NOT genetically modified or processed.

He was no longer constipated.

He didn’t look like he was having seizures from pain.

He began to grow!

For the next 3 years, I was extremely diligent with the foods I gave the twins.  I made everything from scratch with organic ingredients.

Then, I relaxed a bit and would allow ‘regular’ foods at a birthday party or holiday.

Both boys had reactions.  Beckem’s pain returns, his temperature drops 2-3 degrees, dark eye circles, pale, and seems to be in another world.

Adler’s reaction is tummy pain, loose stools, erratic, out of control behavior, and screwed up sleep.

They are 5 years old now and I still make most of their foods from scratch and buy organic.

It is time consuming and some days difficult, but not nearly as difficult as seeing your child deteriorate and suffer agonizing pain.

All content here should be considered as opinion only.  Always seek the advice of your own health professional for any questions or concerns you may have regarding your health or the health of others  See full disclaimer.

This site uses Akismet to reduce spam. Learn how your comment data is processed. 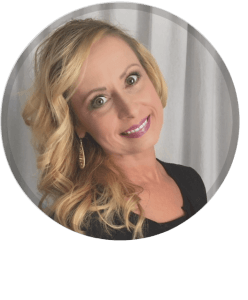